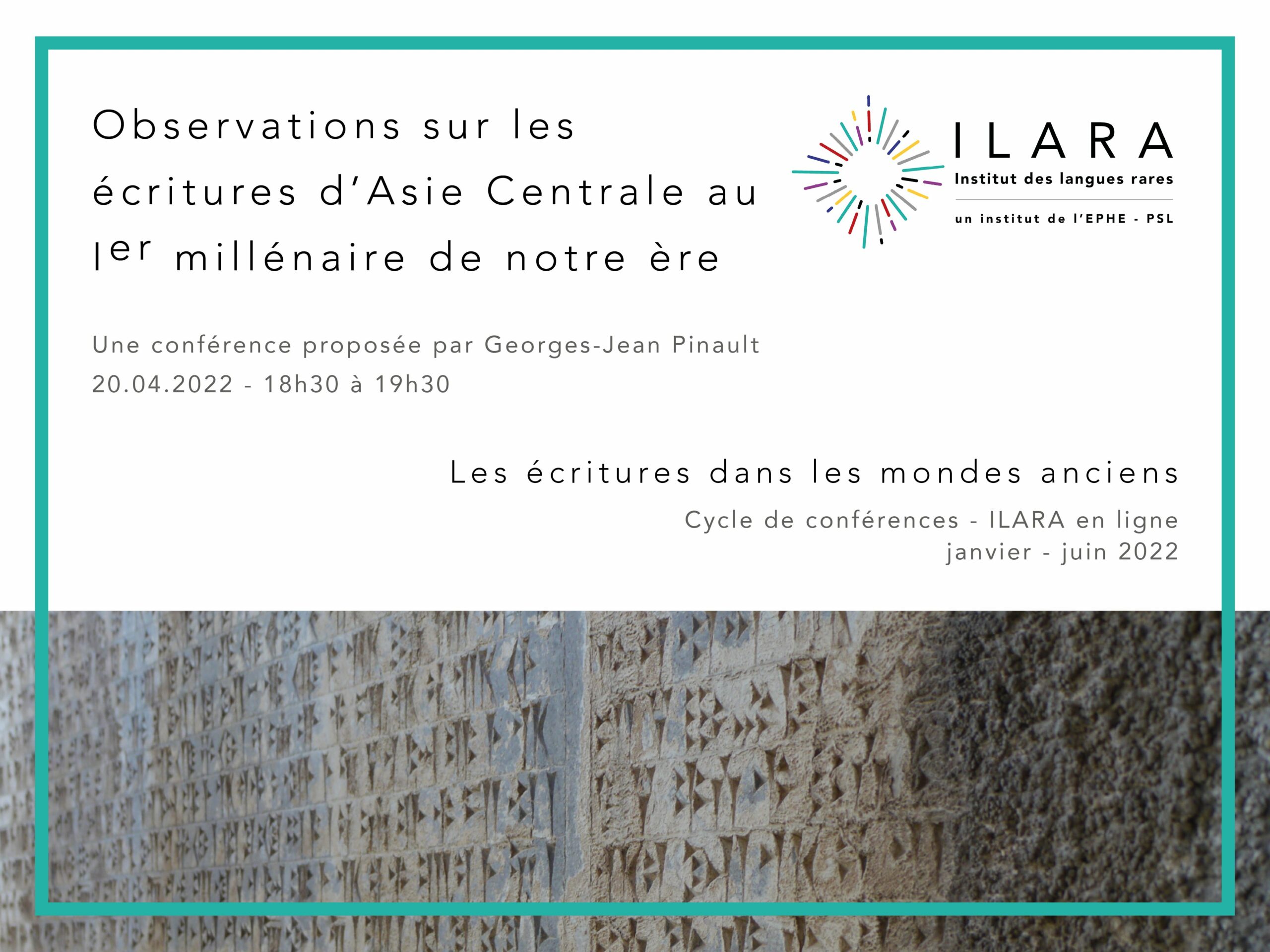 Summary of the conference

The scribes of the Indian world had, since the inscriptions of Asoka (middle of the 3rd century BC), two syllabic writing systems, which were based on the same principle (abugida), namely the implicit notation of the vowel /a/: the kharoṣṭhī (written from right to left, and derived from Aramaic) and the brāhmī (written from left to right). Both systems were used by Buddhist communities from the last few centuries BCE, and missionaries carried these scripts, along with the texts of Buddhism and other elements of Indian manuscript and literary culture, to Central Asia from the beginning of our era.

The kharoṣṭhī, associated with the texts notated in northwestern prâkrit (Middle Indian), alias gāndhārī, did not undergo very significant changes, apart from the influence of the brāhmī. The brāhmī, which was highly adapted to Sanskrit notation, underwent considerable development, and adaptations to local languages, which had different phonologies from the languages of the Indian world: tocharian (A and B), saka (Middle Iranian) of Khotan and Tumshuq, Old Turkic (Uyghur). This resulted in new local syllabaries, many of which took as their model the brāhmī adapted for Tocharian, formerly the B language, spoken in the Kucha region, north of the Taklamakan desert in present-day Xinjiang. In addition, Sogdian, Middle Persian (both of the Middle Iranian stage) and Old Turkish were also noted by scripts whose ultimate model is the Aramaic script, transmitted from the West, along trade routes, and on the occasion of the spread of another religion, Manichaeism.

Georges-Jean Pinault has been a university professor since 1994, and Director of Studies at the EPHE – PSL, Section des Sciences historiques et philologiques, Paris, since 1999. He holds the chair of philology of Central Asian Buddhist texts.

His work focuses on Tocharian Buddhism and on parallel texts written in other Central Asian languages, including Sanskrit and Old Turkic.

He is currently editing the Tocharian manuscripts in the Pelliot collection, held at the Bibliothèque nationale de France. In addition to reading and interpreting Tocharian texts from various collections, his publications include linguistic studies on all aspects of the two Tocharian languages.

His field of expertise also covers the historical and comparative linguistics of several Indo-European languages, especially those of the Indo-Iranian group. He is the principal investigator of the project ‘History of Tocharian texts of the Pelliot Collection’ (HisTochText), 2018-2024, supported by the European Research Council (Advanced Grant, Action number 788205). His bibliography can be found on the website of EA 2120, Groupe de Recherches en Études Indiennes (GREI) of the EPHE – PSL.

About the lecture series

Page dedicated to the lecture series including the brochure: https://ilara.hypotheses.org/2556

Writing was invented, independently, in several places and in different contexts: in Mesopotamia and Egypt at the end of the 4th millennium, in the Aegean world and in China in the 2nd millennium, in the Indus Valley in the 3rd millennium, in Central America in the 1st millennium BC. Various alphabetic scripts derived from these early written traditions by a variety of routes. As much as tools for linguistic notation, scripts are modes of visual communication and markers of cultural identity, reflecting the ancient societies that created, transmitted and transformed them.

This series of twelve lectures presents some of these scripts and their rich history. The lectures, given by specialists in the scripts in question, are aimed at a wide audience.

Link to register for the conference: https://www.eventbrite.fr/e/billets-conference-8-cycle-de-conferences-les-ecritures-dans-les-mondes-anciens-316661361657